Growing up I used to doodle... a lot. In the gallery below you can see the progression of my artistic style from junior-high to now (luckily I eventually learned how to use white paper). In the subsequent section, I outline the work which I created for the Tech Art course that I took in my fourth year of university. The final section details the modeling and rending projects I have undertaken. 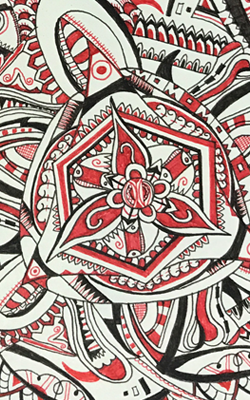 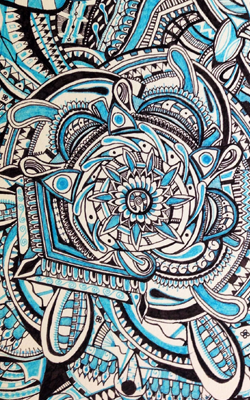 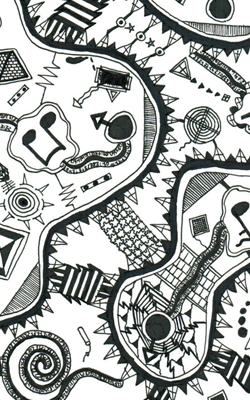 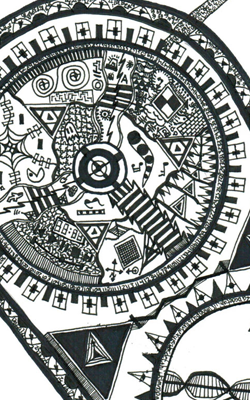 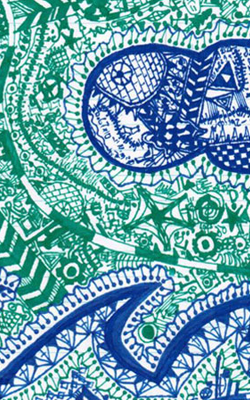 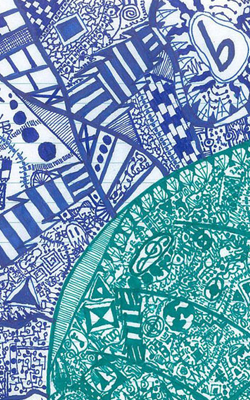 
Tech Art (Fine 392) is a 300-level technical elective hosted by the Fine Arts faculty at the University of Waterloo. Arts and engineering students who are accepted into the course collaborate in groups to form "tech art". As the name implies, tech art leverages the use of technology to produce works of art. Philip Beesley, a former instructor of the course, has a number of his own tech art projects available here.


An arts student and I were paired together to create a mini tech art project over the course of a month. We recalled a piece of art by Arthur Ganson wherein sets of gears are used to reduce the speed of rotation of a motor to such a degree that the final set of gears can be embedded in concrete, yet the motor will still spin. We thought about extending the slow gear idea to a music box concept. The gear boxes could be turned on their sides, and 'found dolls' could spin on top of each gear. Some dancers will never get to finish the dance, though they’re all important to the function of the machine.

Taking the advice of our instructor, we decided to proceed with laser cut wooden gears. During assembly, we discovered it was not feasible to have a second layer of gears spinning underneath the top layer. The network of dowels, holes, and the friction of the gears made a second layer too complex to implement. The second layer would instead be static. 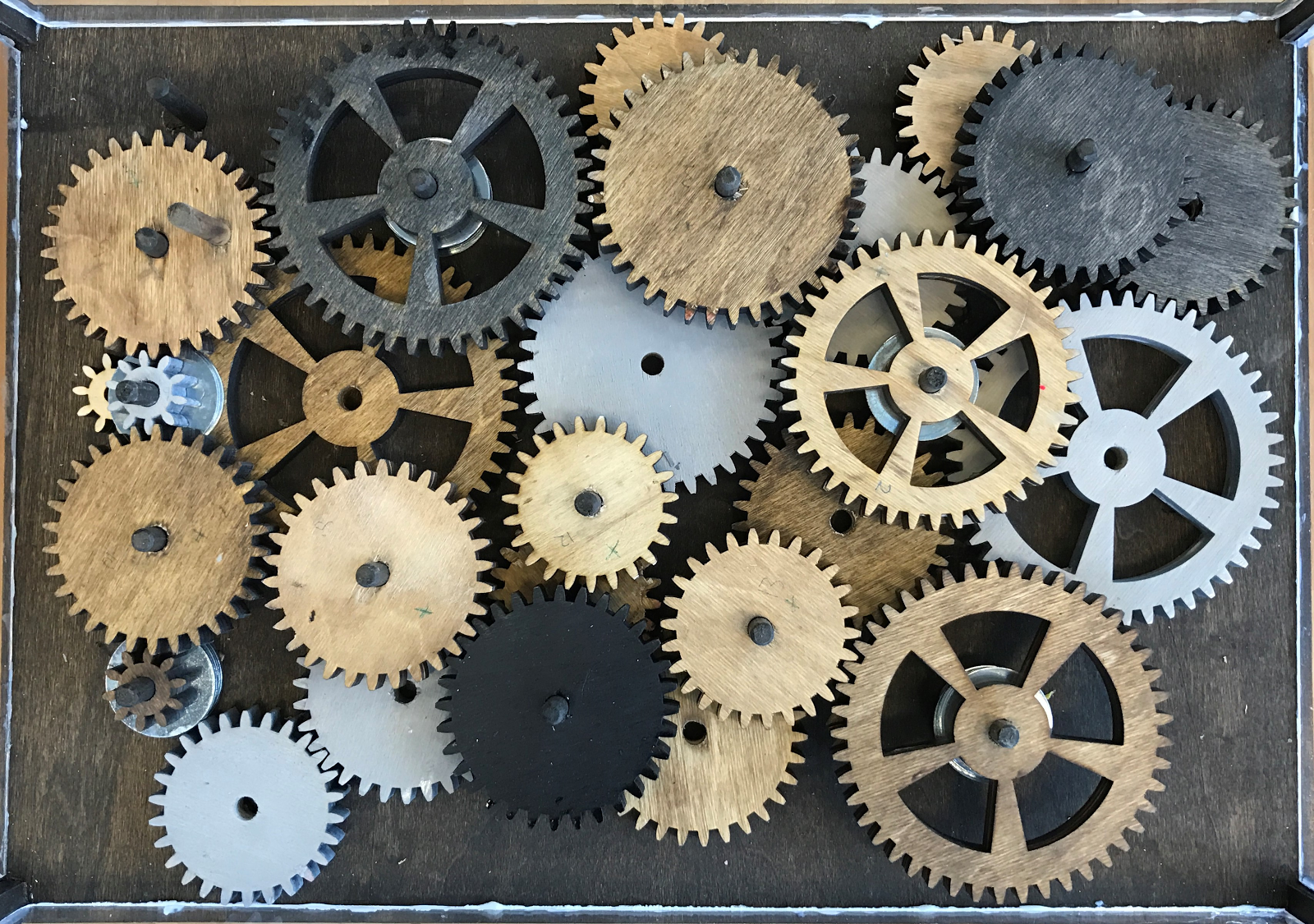 After the dance floor was laser cut, all parts were stained and assembled. My partner found and decorated the dolls which were affixed to the gear surface. 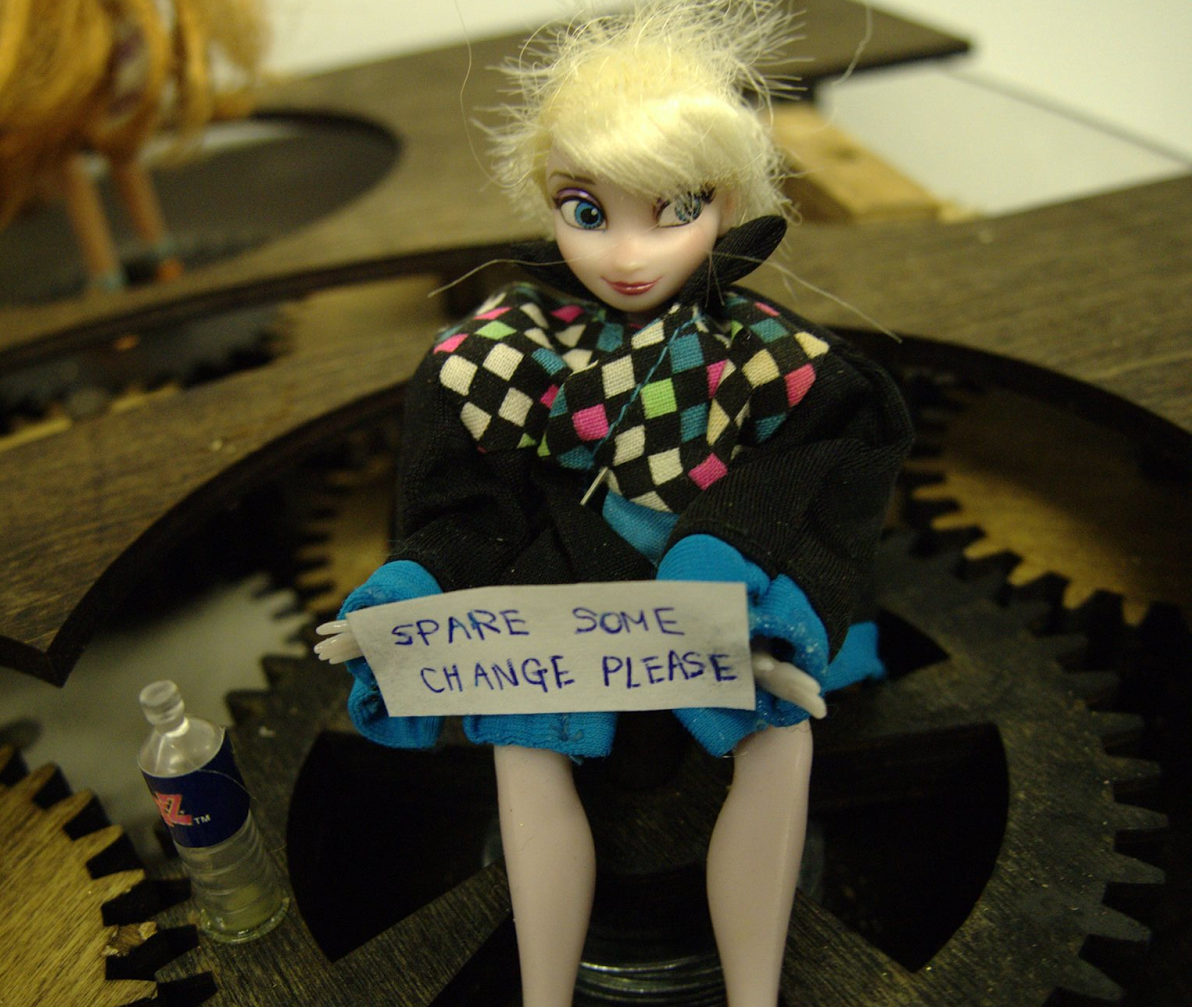 The artist statement and video are shown below.

The interactive piece is meant to represent the notion that members of a society from all walks of life are innately interconnected in one way or another. The work showcases a number of plastic dollars mounted to a collection of interlocked gears. Each plastic doll personifies some aspect of society while the gears are meant to symbolize the inner-workings of society and the inevitable march of time. When a viewer turns the exposed wooden crankshaft, all of the gears turn in unison, allowing the plastic dolls on the surface of the gears to move or dance. However, due to different gear sizes and corresponding ratios of rotation, not all of the gears turn at the same speed. Thus, the dolls on the surface of the gears each respectively rotate, or dance, in a unique way. The unique dance exhibited by each doll is meant to illustrate that despite living in the same society, people perceive and move through life in different ways, and with different burdens. The gears and dancers are configured in such a fashion that should one link falter, the rest of the chain may cease to spin. Although the dolls hail from different walks of life, they are all integral to the overall dance. Finally, a dance-floor separates the plastic dolls from the complex gear workings beneath them. The dolls cannot see what makes them dance.

There are seven dolls attached on five of the visible gears. Each doll represents a social problem that exists in society: single parenthood, materialism, mental disorders, poverty, and forced adulthood. The orientation of each doll has been deliberately chosen such that each doll initially faces a different direction while spinning. As in real life, others face difficulties that may seem unrelated to you, but at one point or another, views will intersect. For instance, the overly mature girl might be influenced by the pretty lady in green dress located behind her. However, her point of view might change when she moves on and meets the poor lady on the other side. The dolls have been modified to represent societal stereotypes. We hope that viewers will question their own social behavior and beliefs when they interact with the work.

Inspiration for The Dance stemmed from Arthur Ganson’s kinetic piece Machine with Concrete. The kinetic sculpture featured a motor attached to a series of gears. Each set of gears reduced the ratio of rotation from the motor such that the final set of gears could be embedded in concrete while the first set of gears spun freely. The Dance attempts to capture the notions of inner-connectedness and futility from Machine with Concrete through the use of connected dolls rotating at different speeds.


Arts and engineering students collaborated in groups of five for two months in order to create the tech art major project. Inspired by the works of Guillaume Lachapelle, we started investigating the idea of infinity mirror art. Ultimately, the group settled on the idea of having a number of infinity ‘cubes’. A cube shape could have two see-through panes and two fully-reflective panes, giving the viewer the illusion of an infinite space inside.

A preliminary prototype was constructed as a proof of concept for the infinity mirror concept. Reflective window tint, acrylic, plywood, and mirrors were used. The reflective window tint was applied to two panes of acrylic, and the mirror was broken into two halves to form the remaining two walls. When an object was placed inside the cube it was discovered that there wasn’t enough light from inside the cube to create the illusion. A smartphone flashlight was placed on top of the cube whereupon the effect functioned as desired. 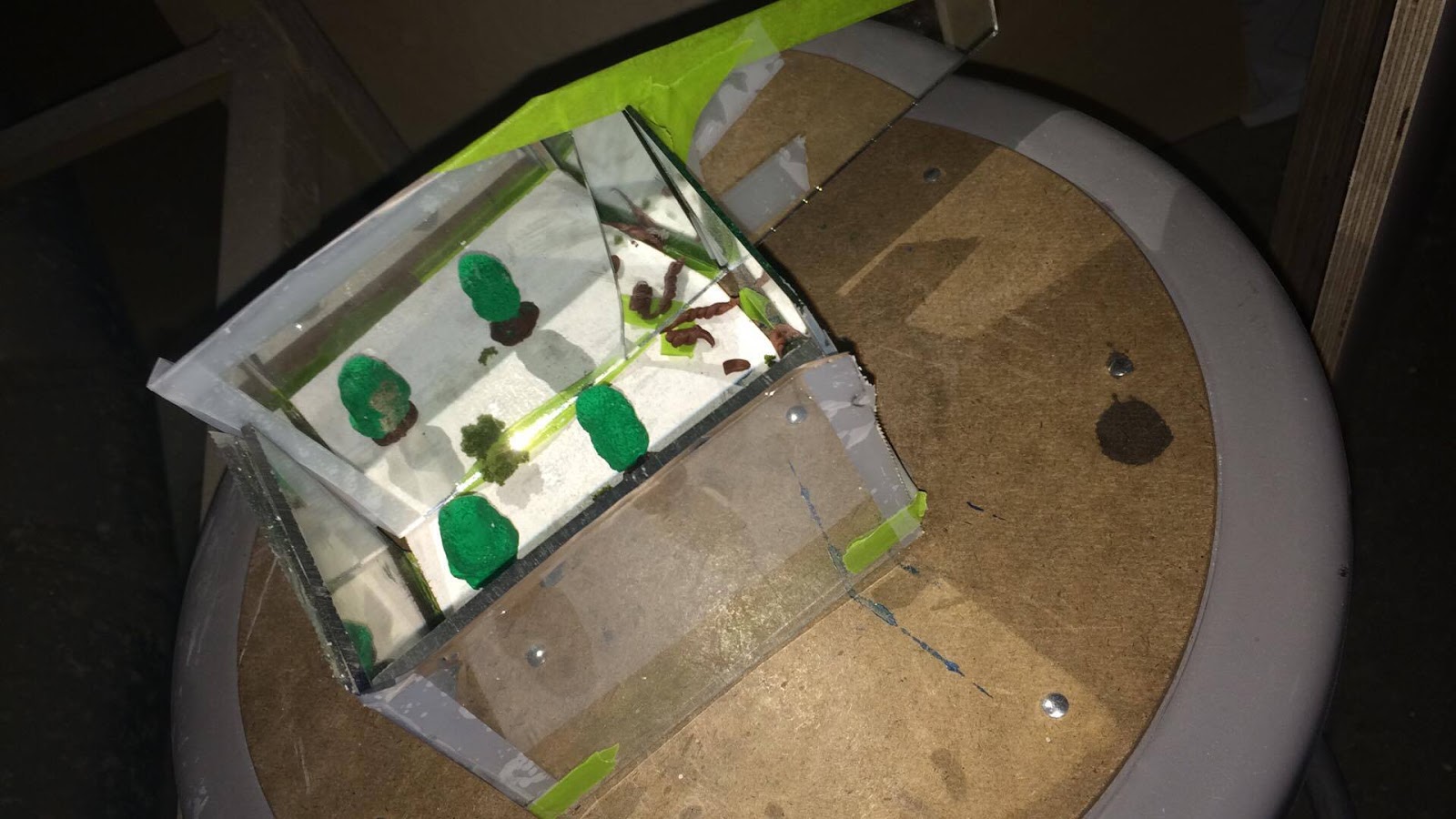 Reflective mylar was identified as a substitute to cutting glass for the mirrors. I created some CAD schematics for the wood/acrylic box and laser cut the pieces for the final boxes. To supply light to the inside of the box, I fabricated an LED grid with a momentary on switch. 3.5V LiPo batteries were used to power the LED grid. 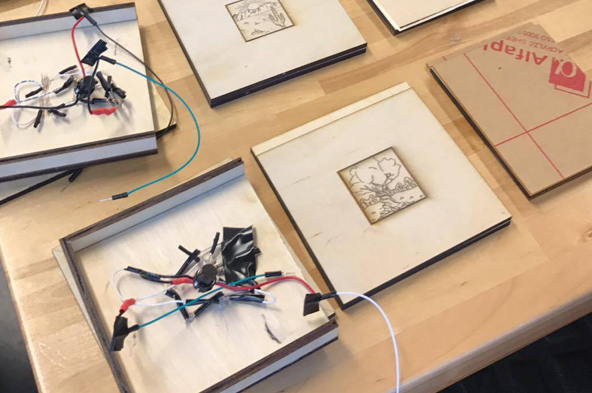 On the aesthetic side of things, each box was laser-etched with a stencil representing what each box contained (Forest, City, Sea, Space, Desert). The walls of each box were glued together, allowing the artists in the group to decorate the inside of each box. It was important that each decoration be as symmetric or homogenous as possible -- incongruencies would ruin the continuity effect from the infinitely many reflections. For the Sea box, translucent blue plastic was glued to each of the four walls, creating the illusion of water. The gallery below shows each completed box. 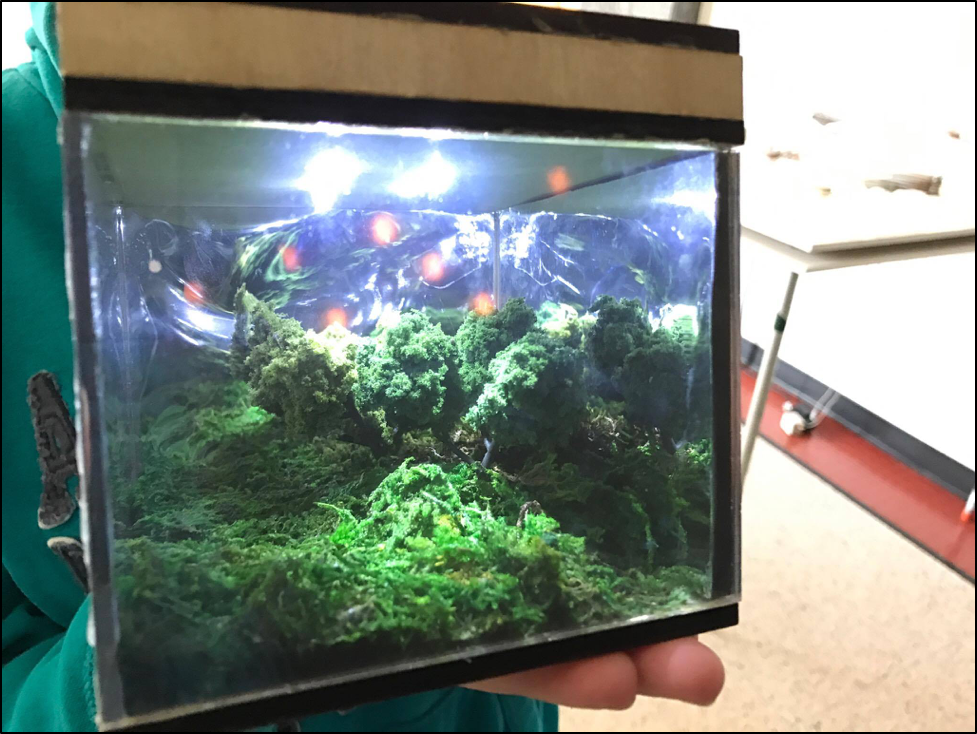 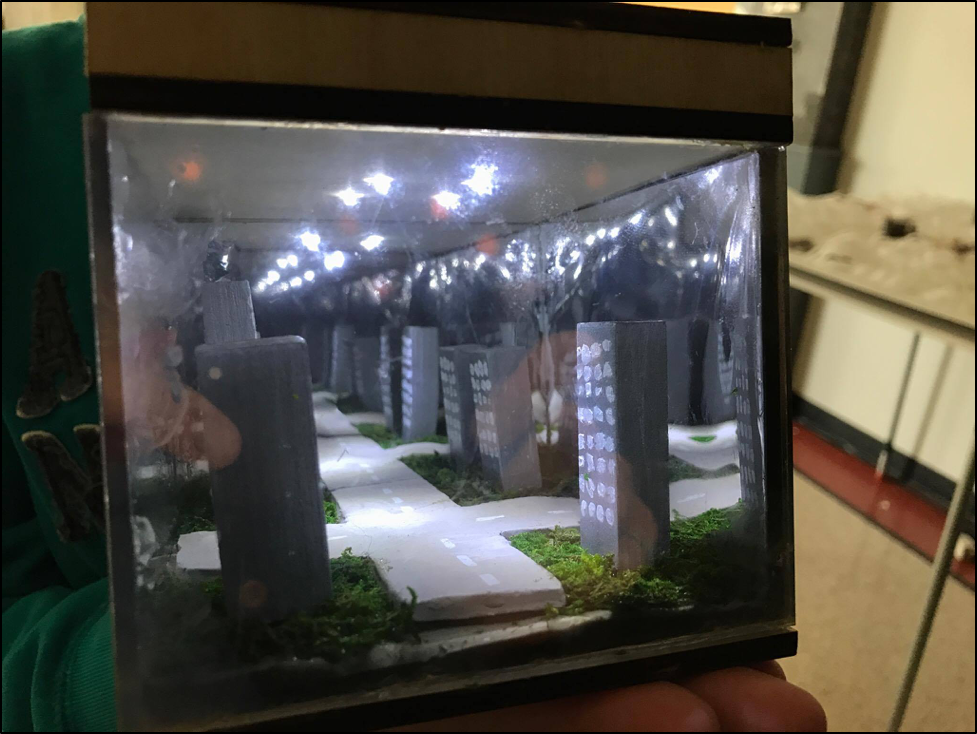 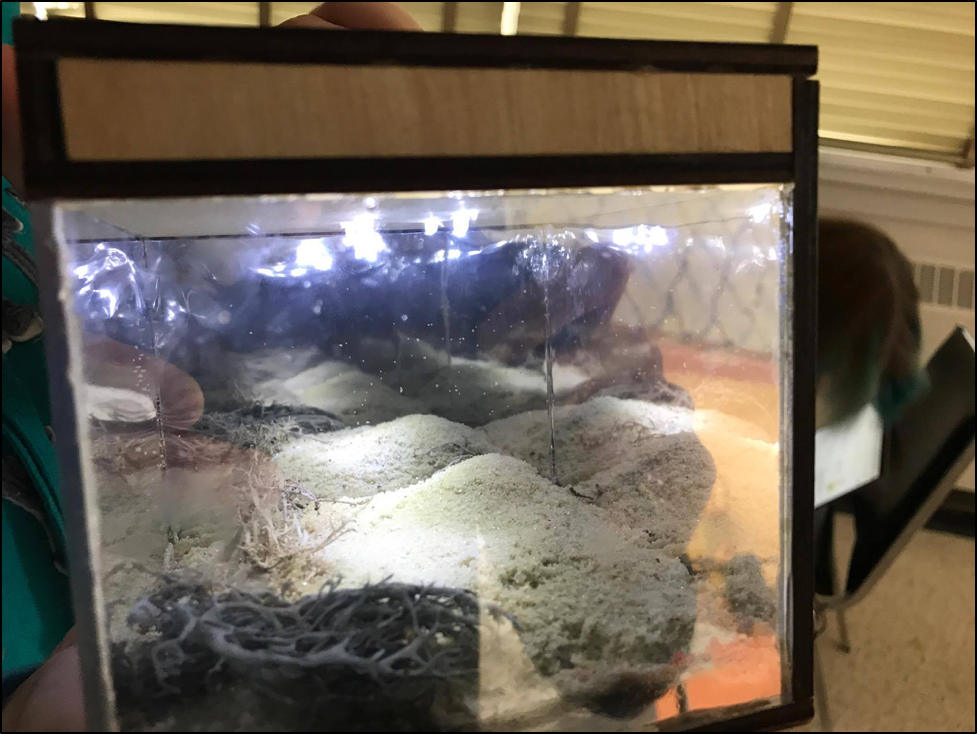 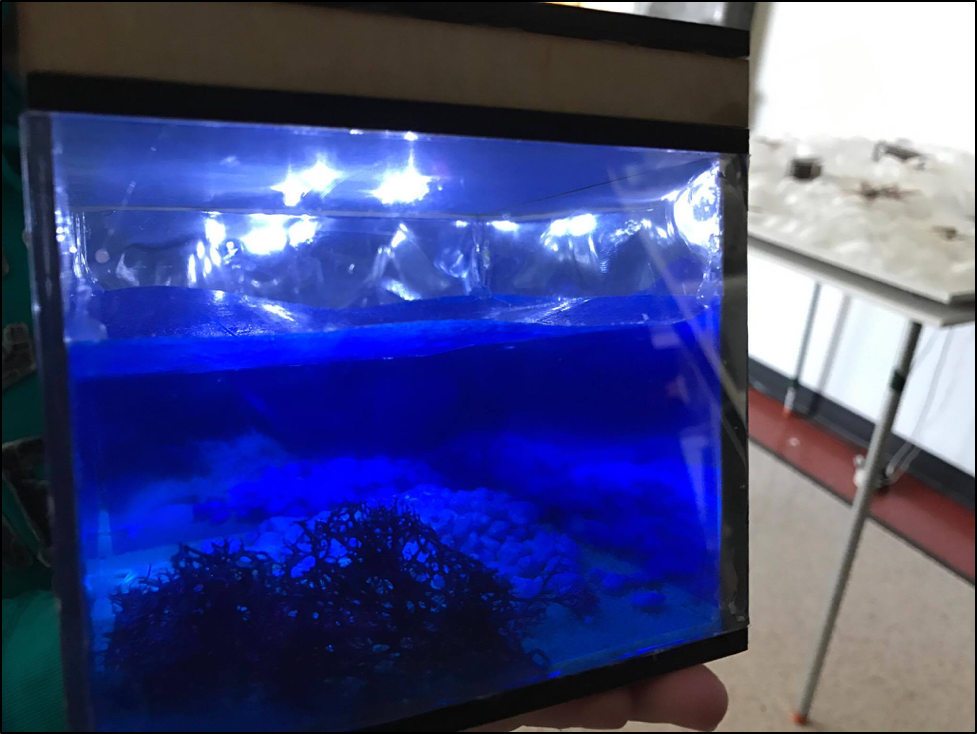 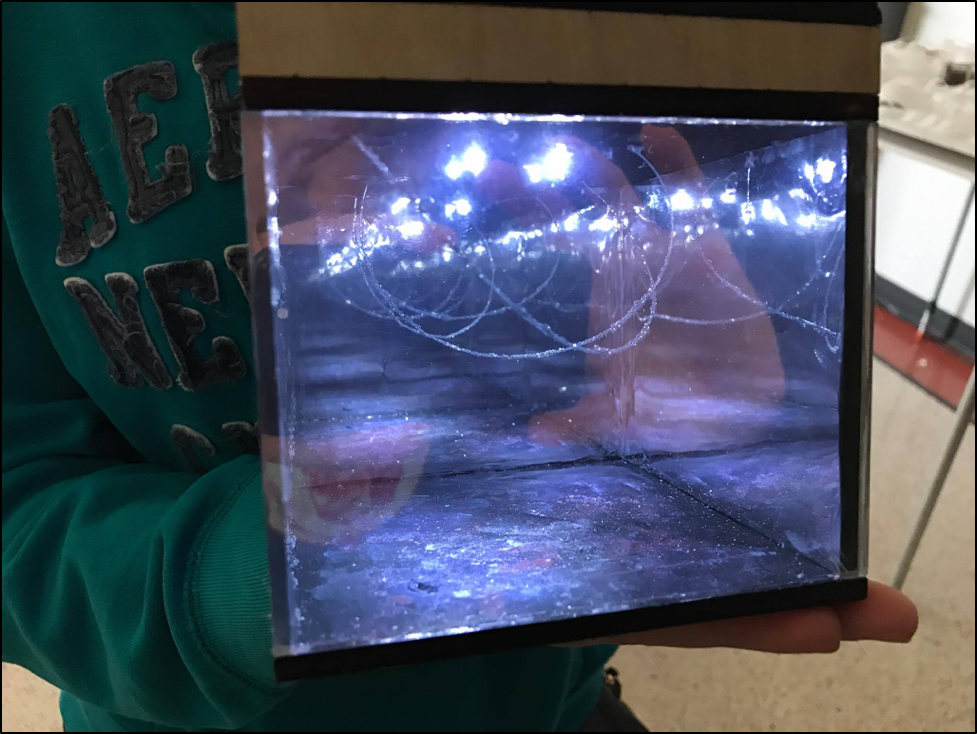 Lastly, the base for each of the cubes was assembled. The boxes were to be arranged in a pentagon, with each stencil facing outwards. Wooden shapes were glued to the bottom of each box and corresponding holes were cut into the base to ensure that the boxes would always face outwards. As a final touch, custom songs were created for each box theme. Using photoresistors, a Raspberry Pi, and a UE Boom 2 speaker, the base was configured to play the song specific to a box whenever a box was picked up. The video below shows the entire piece in action at our exhibit -- Tech(nically) Art.

Endless features five cubes which may be picked up and interacted with. Each of these cubes showcases a different environment, and its own unique piece of music. These environments were selected because of the strong disparity between each one.

The idea behind the infinity mirrors was to create an environment that seemingly stretches on forever. Each of the students involved also has their own take on what the piece means to them, ranging from the simple idea of exploration, to the grand idea of playing god with a whole universe in the palm of your hand.

Pick up one of the cubes, and try and immerse yourself in your chosen environment.

The bulk of the work was split up into four sections: the cubes, the ‘box,’ the electronics for the lights, and the sound. Ali’s focus was on the electronics for the lights and any laser cutting that was required. Jasmine, Veronica and Farah focused on creation of each environment inside the cubes. Karol focused on the sound programming and installation of whole project.


In high school I enjoyed making models and renders with Adobe 3Ds Max and V-Ray. Below are three (somewhat dated) projects I was proud of at the time. The first is a recreation of this scene from one of my favorite mangas, Aria. The second is a render of a Minecraft server my friends and I were playing on. The last is a screwdriver I made from scratch (the non-alcoholic kind). 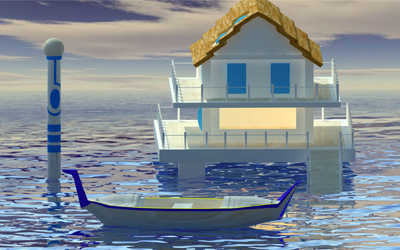 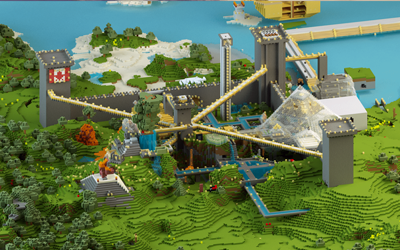 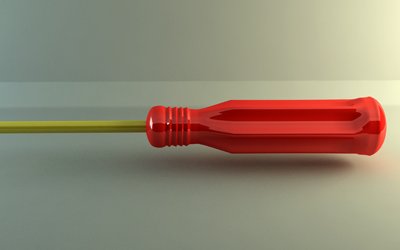